Over his 101-year life, the poet and activist created spaces for artists to thrive — but he also helped transform the sound of American poetry 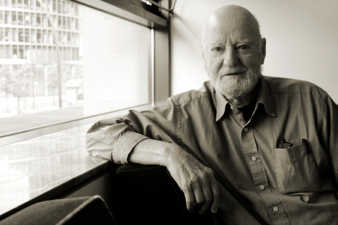 Lawrence Ferlinghetti, who died last month just 30 days shy of his 102nd birthday, lived a life of fascinating contradictions. From a Dickensian childhood — his father died before he was born, and his mother was institutionalized when he was only two years old — Ferlinghetti eventually landed with wealthy foster parents who nurtured his love of literature and art. He was a World War II naval officer who went to Normandy on D-Day and Nagasaki six weeks after the atomic blast, but was forever afterwards dedicated to anti-war writing, activism, and publishing. He was a counterculture icon whose sartorial style included button-down shirts and a bowler hat; and an Ivy League-educated intellectual who wrote poetry that was intentionally populist, in the truest sense of that word: written for the many rather than the few.

But one contradiction stands above the rest. The man who cofounded City Lights bookstore and press and wrote the million-selling poetry collection Coney Island of the Mind, a seminal text in the Beat canon alongside classics like Jack Kerouac’s On the Road, did not consider himself a Beat. As he told an interviewer in the 2013 documentary Ferlinghetti, “I never was a Beat. It wasn’t until City Lights published Allen Ginsberg’s Howl in 1956 that the Beats arrived.” Ferlinghetti famously overcame obscenity charges after publishing Ginsberg’s Howl & Other Poems when the Supreme Court acknowledged the book’s “redeeming social value.” The ruling has provided context for First Amendment battles ever since — from Vladimir Nabokov to N.W.A — and attracted left-leaning writers, musicians, and young people to San Francisco in droves. Today, although Ferlinghetti is justly praised for helping the Beat Generation and hippie counterculture find a place to thrive, that legacy has overshadowed his reputation as a writer.

Sixty-five years since Howl, the muscular Beat and Beat-influenced style of the young writers Ferlinghetti published — like Ginsberg, Amiri Baraka, and Diane DiPrima — remains a staple of lit classes and anthologies, while Ferlinghetti gets less credit for his gentle manifestoes (“The state of the world calls out for poetry to save it. / If you would be a poet, create works capable of answering the challenge of apocalyptic times, even if this means sounding apocalyptic,” he wrote in “Poetry as Insurgent Art [I am signaling you through the flames]”).

While Ginsberg’s long-lined, incantatory declarations spotlight the speaker and require impressive lung power, Ferlinghetti’s jazz-inspired poems read like a conversation, leaving plenty of space to breathe and reflect. They invite the listener to respond. No wonder, then, that his work is beloved by so many musicians, who considered him both an influence and a peer.

David Amram, the genre-crossing multi-instrumentalist and composer of film scores including The Manchurian Candidate and Splendor in the Grass, was a longtime friend and collaborator of Ferlinghetti’s. In 1995, Amram composed and played music to accompany Ferlinghetti’s new project, a recording of his earliest book, Pictures of the Gone World.

“Playing with Lawrence, you couldn’t go wrong,” Amram tells Rolling Stone. “In all of Lawrence’s poetry, he manages to put it in the context of telling a story, so that you feel he is speaking to you in the poem. And then of course like great music of all genres, it not only tells a story, but you see how the story is told. And when you look at his work, it seems deceptively simple, but actually, when you read it yourself, you can read it over and over, like hearing Beethoven or Charlie Parker, and you see that there’s something else there — a sense of structure and time and pace.”

Amram, a key innovator in adding instrumentation to the genre of “jazz poetry” in performances with Jack Kerouac dating back to the 1950s, described his collaboration with Ferlinghetti this way: “The good thing about Lawrence is, he was able to approach it spontaneously, and allow me to try to do my best. I think he knew I was going to try to do something that would hopefully fit into his poem and leave space — rather than having music grinding away as if you were in an elevator or supermarket, trying to have it on occasion and having it be something that would be part of the whole story.”