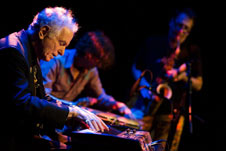 January 13th • Amram’s Fanfare and Processional for Brass Quintet will have its NYC premiere at Merkin Hall., performed by the Brass Quintet of the NY Philharmonic.

January 26th • Amram’s Violin Concerto with orchestra will be recorded at the Miami Frost School of Music by acclaimed violinist Charles Castleman with the Henry Mancini Orchestra, and subsequently be performed by them in Miami on April 12, 2019

DAVID AMRAM Elegy for Violin and Orchestra
BEETHOVEN Symphony No. 9 in D Minor

Below are the titles for each of the three movements of Partners: A Double Concerto for violin, cello and orchestra

Amram will also do workshops and programs at the University
There will also be a 3pm repeat of PARTNERS March 31st at 3 p.m
The three movements of Amram's new double concerto PARTNERS honors the different genres of music that these three groups of musical partners celebrated. These musical pioneers are honored in this piece for the partnerships they formed which continue to show how the timeless genres of music from the past enriches the cultures of the whole world today.

All six of them always took the time to be gracious and supportive to young upcoming musicians and composers who hoped to be able to do something in music. When Amram came to NYC in 1955, he was one of those young people whom the six of them took the time to mentor and encourage.
ony
Amram will also do workshops and programs at the University with music students and non-musicians to encourage them all
to delve into their own creativity and apply that to whatever they do in life, and show that by interacting with people of different disciplines
you can remain a life time student as Amram considers himself to be at 88.

Following the Texas premiere at Tamiu Recital Hall the evening of March 30 There will also be a 3pm repeat of PARTNERS March 31st at 3 p.m

Both concerts also include Brahms Symphony #2 in D Minor. Students can attend both concerts for free!

April 7th • 8:00 • David Amram Quartet - The Falcon, Marlboro, NY
featuring Kevin Twigg - Drums, Glockenspiel, Rene Hart - Upright Bass,
Adam Amram - Conga and David Amram - Vocals, Piano, Flutes, Percussion & French Horn
"Having visited the Falcon and loving the feeling of community that fills the air, I am honored and happy to perform there with my band. The Falcon reminds me of my favorite places in the 50s when I played in Greenwich Village with the bands of Charles Mingus, Dizzy Gillespie and Oscar Pettiford; when Jack Kerouac and I gave the first-ever jazz-poetry readings in NYC; when I played with Ramblin’ Jack Elliot, Odetta and Pete Seeger in the 60s, and was composing for the Lincoln Center Theater’s production of Arthur Miller’s "After the Fall" and Joe Papp’s NY Shakespeare Festival, as well as creating film scores for "Splendor in the Grass" and "The Manchurian Candidate". I played with the great singer-songwriters of the time, with Middle Eastern and Native American musicians, and in the 70s, with the great Latin-jazz events."

The Peoples' Voice Cafe is an alternative coffee house offering quality entertainment. We provide a space for the artistic expression on a wide variety of humanitarian issues and concerns. The cafe is a collectively run not-for-profit corporation and is not affiliated with any political organization.

Please Bring your family and friends of all ages!

May 16th • Sloop Club, Beacon, NY – David will give a Talk about Pete and Toshi Seeger and the work of the Clearwater educational ship

8/1/2019 • August 2019 - Amram will spend most of August completing Fanfare, the first movement of Global Suite for Winds, Brass and Percussion, commissioned by the Harvard Wind Ensemble to be premiered in the fall of 2019. The entire three movement suite will be premiered in the fall of 2020 as part of the series of musical celebrations for Amram’s 90th Birthday taking place in New England and around the country.

9/1/19 • September 2019 – New York Premiere of Bulgarian Wedding: A Duo for Violin and French Horn, performed by violinist Elmira Darvarova and french hornist Howard Wall. The premiere celebrates Amram being appointed as the Artist Emeritus for The Village Trip, a festival honoring 150 years of artistic innovations in Greenwich Village. He was last year's first Artist-in-Residence.

Sunday, Sept. 15th • 3-7 pm • Cornelia Street in Exile returns Downtown as Cornelia Meatpacking
At Gansevoort Plaza, at Ninth Ave. and Gansevoort St, the host will be Robin Hirsch, the former owner of the Cornelia Street Cafe. Kicking off the show will be David Amram. Also performing will be Arturo O’Farrill, the Shinbone Alley Stilt Band and Rogerio Souza and the Billy Newman Quarteto.

September 21-22 • Farm Aid Concert
David will be performing again at Willie Nelson's Annual Farm Aid Concert
Alpine Valley Music Theater, Alpine, Wisconsin
David will be performing a pre-concert show on Friday 9/21 for supporters and volunteers. This "Farm Aid Eve" event is where David was the first recipient of The Spirit of Farm Lifetime Award.
Saturday afternoon, he will be leading a workshop "Bringing Farmers and Musicians Together in Their Respective Communities"
Then Saturday evening, he will be a guest performer with the Willie Nelson Band playing the finale set of the concert.

Sunday, October 6th • 1-4 pm • Amram Jam at Bobolink Dairy and Bakehouse
369 Stamets Rd, Milford, NJ 08848
phone # 908-86-GRASS
David will be performing with Renee Hart and Adam Amram at their final pig roast of the 2019 season. There will be cheese plates, iced tea, and garden veggies at the show, so come hungry! Bring your lawn chairs and blankets!
There is no charge for the concert, but you may to reserve your spot at http://shop.cowsoutside.com/specialevents.aspx
For more info about concert and venue: http://www.cowsoutside.com/

October 10 - 14th • Lowell, MA - Lowell Celebrates Kerouac is a 4 day festival observing the 50th Anniversary of the Passing of Jack Kerouac in October of 1969 and His Continuing Literary and Cultural Legacy
David will be featured at the following events:

November 4 - 8th • San Jose, CA - Harker School. Amram will be the Artist-in-Residence for one week at the Harker School in San Jose CA and visit with students to share the relationship of studies of 20th Century Literature, Social Studies, American History, Creative Writing, Film, Theater, Biology, Anthropology, Comparative Religions and Music.
He will also encourage students who never felt comfortable participating in a musical group to see simple ways to relate to improvising as a way to learn to solve everyday problems and see how formal music is created by understanding what we are surrounded by and finding a structure to celebrate what we often take for granted or ignore.
Amram will also conduct the school orchestra in two of his compositions and join the jazz band as a soloist and band member.

November 10th, 2019 • 5:00 pm • 9TH ANNUAL AWARDS DINNER:  THE BEYOND SALON
Celebrating the next 50 years of Beyond Baroque with the Beyond Salon, an evening of words, music, food, wine, and wit at the historic Santa Monica Bay Woman’s Club.
Beyond Baroque
681 N. Venice Blvd.
Venice, CA 90291
http://beyondbaroque.org


"One of America’s true musical treasures and a great friend of Jazz Forum Arts, the distinguished composer, musician, conductor, and author David Amram will celebrate his 89th birthday with special guests and good friends. With David’s lifetime of honored achievement in jazz, classical music, film scoring, world music, poetry and so much more, there’s a lot to celebrate and you can join the party."

November 17th, 2019 • 7:00 • The Towne Crier - Beacon, NY
David Amram and Friends continues to celebrate his 89th birthday in his own neighborhood

November 23, 2019 • The Vibe of the Village Festival
1220 Fifth Ave at 103rd St, NYC
Celebrate the creative legacy of The Village Voice (1955-2018), the downtown alternative weekly that "gave New York its cool."
The Festival will be three days (11/22-11/24).
At Saturday at 8:00 pm:
Voices of the Village with David Amram & Friends
Legendary composer, conductor, and musician David Amram leads an evening of performance celebrating the creative and collaborative spirit of the Village from the 1950s and '60s on.
https://www.mcny.org/events/all

December 23, 2019 • 8:00 pm • Music from Five Centuries
A concert by Elmira Darvarova, Violin & Howard Wall, Horn. David's piece "Bulgarian Wedding" was commissioned by Darvarova and Wall and this will be its New York premier. There will be other music from the 17th century to the 21st century, from Baroque and Renaissance to Classical, as well as Romantic, Contemporary, Folk, Blues, Jazz, Tango, and Rock.

For a full program listing of works follow this link:
https://www.carnegiehall.org/Calendar/2019/12/23/Elmira-Darvarova-Violin-Howard-Wall-Horn-0800PM